The military commander of the occupation in Hebron, Lt.-Col. Udi ben Moha or “Udi ben Muha” and his thugs, Lt.-Col. Aviv Feigel and Police Commander Menashe Aveshalom Peled (or “Moshe Aveshalom Peled” or “Aveshalom Peled”) continue their career of systematic crimes and attacks against the Palestinian civilians and their property in the occupied city of Hebron, under the eyes of Palestinian Authority and of the molesters, drunkards from the TIPH. 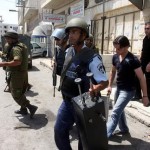 [1]Lt.-Col. Udi Ben Moha and the Colonel Peled, who are both well known as religious extremists, freed the hand of the criminal Jewish settlers in Hebron and continue turning the heart of the old city of Hebron into a concentration camp sealed by metallic gates, a policy introduced by Yehuda Fuchs, the former IDF commander in Hebron, expanded their theft of Hebron area H2 under their control to Hebron area H1 under nominal the PA control, (In 1997 the Hebron Protocol (part of Oslo II), signed by the Israeli Government and the Palestinian Authority divided Hebron into two areas: H2 under Israeli military control and H1 supposedly under Palestinian control “civilian and security authority”). They shut down and vandalized the charities of the orphanage in Hebron H1, and then moved to shut down the radio and TV stations. 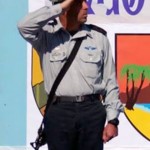 [2]On Wednesday 20 August 2008, Lt. Col. Udi Ben Moha , Lt. Col. Aviv Feigel and Colonel Peled, the Police Commander of Hebron, send their criminal soldiers and police in company of two civilian officials from the Israeli ministry of communications, in company of military and police vehicles, raided and shut down three local radio Stations: Wan FM Radio, BBC Radio, and Freedom Radio Al-Huryyah in the city, they appropriated the equipment and terrorized the workers. The Israelis kidnapped two managers: Mahmoud Kanabi, who was on-air broadcasting a program,  and Muhammad Kafesha, and took them to an unknown destination. They then proceeded to vandalize and ransack the TV Station Al-Majed in Hebron.

Udi ben Moha, the new military commander of Hebron, is a war criminal responsible for hundres of murders, for the destruction of dozens of houses and other private and public property, and thousands of dunums of agricultural land in Gaza.

The General Secretary of the International Federation of Journalists, Aidan White, expressed his anger about the intolerance of the Israeli authorities due the  illegal closure of these Palestinian Radio stations. He promised that he would follow the issue. Finally, he issued the press release which is quoted below:

The Israeli Police, which is supposedly there to implement the law, actually helped 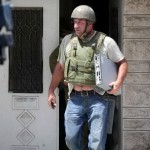 [5]the military and ministry of communication in their criminal attacks of theft against the Palestinian journalists, the Radio and the TV Stations.

The head of the Israeli criminal Police, Moshe Aveshalom Peled, is a former police officer in the illegal Jewish settlement Gush Etzion near Hebron, which is well know as a den of religious extremists commander among the Jewish settlers. Colonel Peled and all the Police staff work under orders of Lt. Col. Udi Ben Moha, who planned and authorized these raids against the Palestinian Radio stations, and before that, against the orphanage and charities. 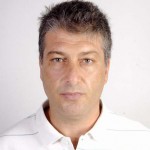 [6]Tariq Al-Kayal, the owner of Al-Majed TV Station in Hebron and a member of the Palestinian syndicate of journalists, said that seven Israeli soldiers, three Israeli Police and two Israeli officials from the Ministry of communication raided his TV station, vandalized the TV telecasting system, the waves units, and the filter system of his station. Tariq said that Al-Majed TV station had already been closed for a year as a result of the deteriorated financial situation and the continuous attack by the IDF. He had rented a part of the station to the BBC.

Al-Kayal said that the IDF brought forward specious claims to justify their criminal raids: they came saying that the radio transmissions interfered with the communications at Ben Gurion airport in Tel Aviv, which is about 65 Km away and behind many hills.

The IDF “justifications” are clear fabrications by the Lt. Col. Udi Ben Moha and Lt. Col. Aviv Feigel and his translation team, which translated the Arabic Newspapers and listened and watched the Palestinian broadcasts, and wrote their reports, which were always sent to 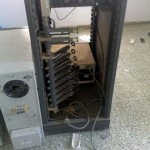 [7]the military commander and his units in Hebron and to the highest Israeli military authorities in Beit Ill, the office of the Central Command, currently general Gadi Shamni, and the Intelligence.

Many arrests, murders and terrorist actions of the Israelis originated in the translations and reports of Aviv Feigel and his team. These translations can be considered as a way to control the Palestinian media, and they had and have the clear mission of spying on all of Palestinian society on behalf of the Israeli military administration office. Aviv Feigel team continuously called journalists on their cell phones and threatened them because of their reporting, whenever fulfilling their honest journalistic duties were not in the taste of Feigel. 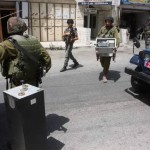 Feigel [8]team also would call Palestinian citizens and Palestinian officials, ordering them to appear at meetings in the “Civil Administration” and then proceed to interrogate them for days on end about every aspect of their lives, their neigbours, colleagues and families, and pressure them to collaborate. Feigel and his team would use raw violence, threats of imprisonment, conditioning the fulfilment of economic and medical needs of these Palestinians and their families, and many other pressure methods to turn them into collaborators.

The closure of the Palestinian Radio stations in Hebron by the military occupation, their vandalizing and confiscating the equipment, their terrorizing of the workers and arresting some of them is clearly a criminal decision taken in the office of Lt. Col. Udi Ben Moha and Lt. Col. Aviv Feigel, the final order for this miserable action signed in the office of the war criminal in the central command, brigadier general Gadi Shamni.

The three destroyed radio stations were licensed by the Palestinian authorizes. None of them are linked to the Palestinian political factions of Hamas, Jihad, Democratic Party or Popular committee. The stations did broadcast music, advertisement, news, and other programmes of interest to the public. 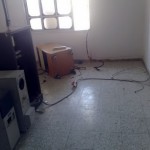 [9]According to Tarik Al-Kayal, who went to the Israeli Police station to ask for the release of the BBC equipment and to file a complaint against the ransacking of his equipment, an investment of over US$130.000. The Israeli police put Tariq under investigation and detained him at the police station for the whole day, and finally they refused to release the equipment and to take his complaint. He was treated in an exceedingly rude and unpolite way.

The Israeli raid happened under the complicit eyes of Palestinian authority, who freed the hand of Israeli military occupation in Hebron without any kind of legitimate interference. They did not protect these Palestinian civilians and their businesses. The Israeli raid was against one Fatah radio, “Freedom Radio Al-Huriyyah”, as the owner of this station is a PA security at Alternative Security Forces.

In the mean time, the equipment of the BBC Radio was returned, but in an unusable state.The Israeli regime and its institutions must return all the looted equipment in working order, and repair on their own costs and time everything else they destroyed or otherwise made unusable.

Please let the Israelis know that they should no longer count with impunity for their barbaric and criminal behavior, that enough is enough. If you would like to contact the IDF or the Israeli police in Hebron to protest against their criminal actions, below are the direct phone and fax numbers of the officers named above. Please tell them to release the two journalists who they kidnapped, to return everything they looted and to leave the equipment functioning like before or to replace everything they broke with functioning equipment of similar or better specifications, and tell them that they are making themselves punishable for war crimes and genocide under Israeli and international laws.