On December 8, 2007 I wrote to Karl-Henrik Sjursen, head of the TIPH Mission, to his Secretary, his Deputy, to the Head of TIPH Operations and to the Head of TIPH Logistics regarding the deplorable situation in Hebron and the ethnic cleansing and genocide committed by the Israeli military commander, Colonel Yehuda Fuchs in the old city of Hebron. I also sent the TIPH a link to my Hebron gallery [1]. I wrote them “I would appreciate if you ask your partners, the Israelis and the Palestinians, what they can do to help stopping the ethnic cleansing and Genocide under way in Hebron. I would also appreciate if you could ask your governments, the six countries, to stop fearing Israel and to play an active role in stopping the genocide of Israel in Hebron and the rest of Palestine, and to remove the Israeli lockdown of all of Hebron”. 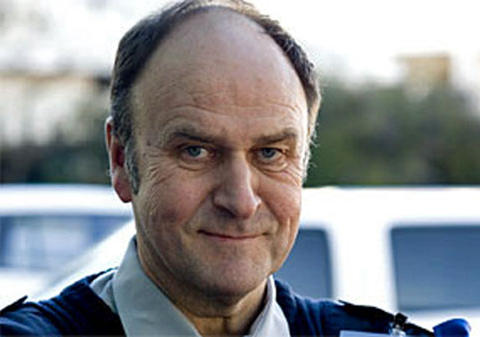 I have not received any answer or comment about my Email from the TIPH, but some days after I wrote them, the TIPH released an article about roadblocks in Hebron on their own website (www.tiph.org) : “113 roadblocks, closures and checkpoints in Hebron [2]“. The TIPH Head of Mission Karl-Henrik Sjursen said that the TIPH argues with the Israelis that many of these closures should be removed without security being compromised.

The information which appeared on the TIPH website about the 113 roadblocks in Hebron is not true. There are actually over 200 permanent roadblocks in the city of Hebron. The 113 permanent roadblocks mentioned by them are the ones with which Colonel Yehuda Fuchs sealed all the entrances to the old city, blocked all the streets to the Palestinian markets, the roads around the Jewish settlement and the nearby areas. Additionally, there is an increased number of so-called “military roadblocks” spread everywhere in the city and streets and on the rooftops of Palestinian houses. 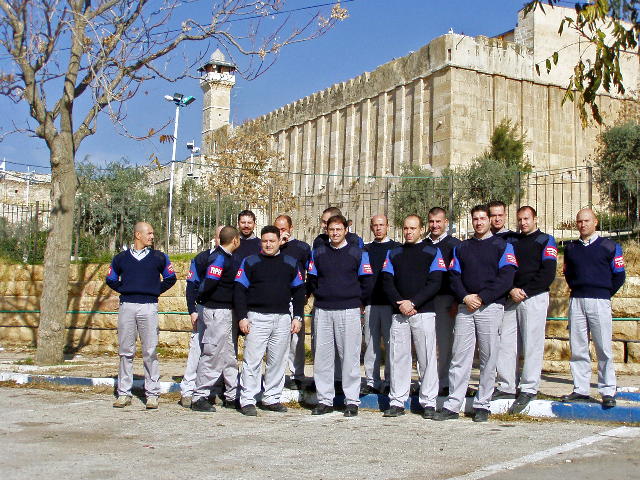 Norway [4], Italy [5], Denmark [6], Sweden [7], Switzerland [8] and Turkey [9] have had their representative mission of international observes since 1997 in my homeland in Hebron. The TIPH was called for during the Oslo peace talks by the Israeli government and the Palestinian Authority to assist them in their efforts to restore normalcy to the city of Hebron, and to record the Israeli breaches of the International Humanitarian law in the city where 400 armed illegal Jewish squatters live among the Palestinian inhabitants and are protected by 5000 soldiers. Most of the TIPH members are police and military wearing civil clothes.

The TIPH mission in Hebron is supposedly reporting and providing their countries, Norway, Italy, Denmark, Sweden, Switzerland and Turkey, information about the violations of the human rights in Hebron since 1997. This means that the archives of the governments of these countries are full with reports of crimes against humanity of the occupiers, but there was never any real intention of these countries to use their diplomatic channels to stop these crimes, it means that there was and is a clear support for the State of Israel and for the occupation.

In 2006 I attended a “conference for peace” in Switzerland. Switzerland is one of the countries which takes part in the TIPH mission in Hebron. This “peace conference” was held at the Lassale-Haus Bad Schönbrunn [10] near Zug, and persons working with the Swiss government were present. The organizers of this conference suppressed and silenced the political needs voiced by Palestinians who were present, and many others were obvious puppets in the hands of the Israelis.

[11]From the Israeli side, among many others, Reuven-Razi Barcay from the IDF Radio attended the conference to legitimize the IDF crimes in the Palestinian cities before a western, Christian audience (Lasalle-Haus belongs to the Jesuit congregation of Switzerland [12]).

Another attendant was Ezriel M. Levi, the Chief of the executive officer of Jerusalem Development Authority, which builds the Apartheid Wall, attended this conference in order to legitimize this inhuman project and to seek financial for it help from European countries.

Israel has implemented a continuous policy of ethnical cleansing and genocide, carried out by

[13]the Israeli occupation authorities, which has turned all of the West Bank, but especially the city of Hebron into a concentration camp. Due to this, Palestinians live most of time under a military curfew. The TIPH forces observe everything that happens in the city, and they have expressed their sympathy for the people, they organize social, educational and health activities to help the poor. The TIPH people in Hebron supposedly report to their governments, who have the power to doing something to make life easier for Palestinians. But their governments always forget Hebron, even they forget their TIPH troops who are stationed there. 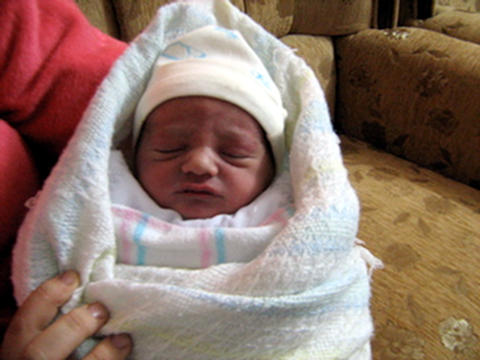 One example of the Israeli criminality is the case of Mrs. Ashraf Sider from Hebron, who was not allowed to pass the illegal Israeli checkpoint in Tel Rumeida to go to the hospital in order to give birth to her child. On Monday, January 7, 2008, Kifah Ashraf Elias Sider gave birth to her child Ahmad at 3AM in the middle of the street at an Israeli military roadblock near the occupied Tel Rumeida in Hebron. Kifah and her husband Ashraf live in Tel Rumeida, were the Palestinians are not allowed to drive or to use their own cars in the streets or go anywhere out of their homes without the Israeli occupational soldiers permission. The sick people and the emergency cases in Tel Rumeida are obliged to access a military roadblock, where they have to wait until an ambulance come and pick them. At night the IDF soldiers closed the doors of the military roadblock, and the key hide in the pocket of the soldiers.

When Kifah and her husband Ashraf Sider arrived the Israeli military roadblock at 3AM, Kifah was crying, screaming and bleeding and begging the soldiers to open the roadblock, and telling them that she want to give birth. The soldiers of the inhuman Israeli State did not care about her screaming, they just answered her that they required permission from their commander. Kifah collapsed in the street, she gave birth under harsh and unhealthy conditions on the street, at below-zero temperatures, the wind was cold and freezing, she gave birth before the Israeli soldiers. The Palestinians neighbors near the military roadblock spread a blanket on the floor and helped her to take the child. I wonder if this tragic birth which the Palestinian woman Kifah Sider was forced to have under inhuman conditions will move the governments of Norway, Italy, Denmark, Sweden, Switzerland and Turkey to use their diplomatic channels to exert pressure on the State if Israel to stop their crimes against Palestinians in our own homeland in the city of Hebron. 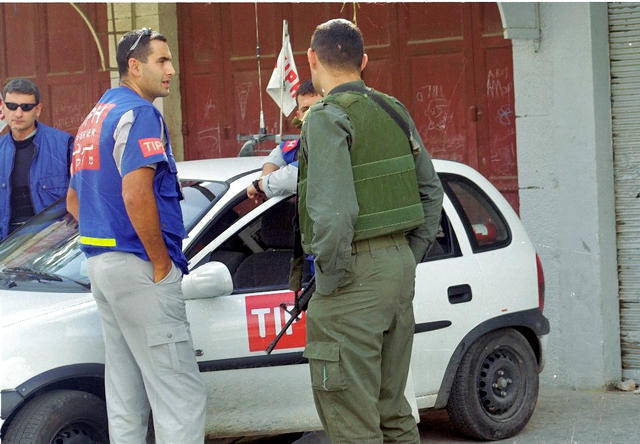 As a Palestinian, I understand that the governments of the six countries, Norway, Italy, Denmark, Sweden, Switzerland and Turkey, who receive continued reports about the Israeli crimes from the TIPH in Hebron, are accessories to crimes against humanity proscribed internationally by states which are signatories of the “Convention on the Prevention and Punishment of the Crime of Genocide of 9 December 1948” [14], by omission and complicity, because far from doing everything in their power to compel Israel to comply with their duties under this and other international treaties, they have instead looked away and helped the Israelis commit and cover up their vile crimes. These governments know about the crimes of Israel but they have done nothing to prevent them and continue supporting Israel in all ways possible. The officers of these governments are guilty accessories due to their inaction. They also put their personnel in Hebron at risk of prosecution under legal statutes which derive from above accord, and which covers genocide and crimes against humanity. It must be noted that the six countries mentioned above are signatories of this convention, and that Switzerland is its depositor and should have a special interest in making other countries comply with its stipulations. 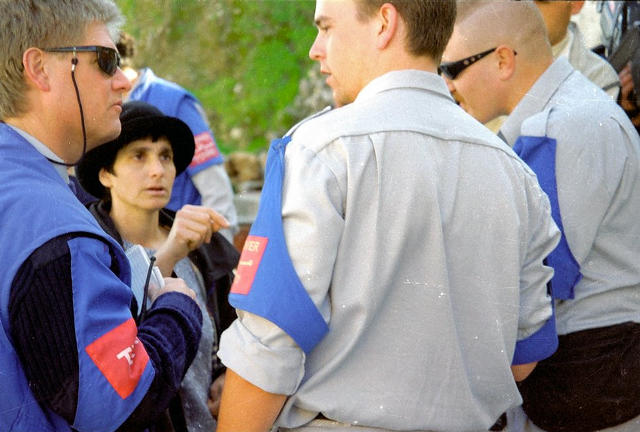 The local Palestinians know that the TIPH personnel stationed in Hebron do not have any power to stop the inhuman situation and the genocide. They see them as a foreigners and tourists who do not have any power to protect even themselves. Palestinians have also witnessed the settlers attacking them and calling them Nazis. On March 5, 2007, a Swedish member of the TIPH was injured. The IDF soldiers were stopping their cars during their official tour in the old city. The TIPH personnel are scared from the settlers, and seldom do the Palestinians see them on-scene when the IDF and the settlers are actively brutalizing Palestinians.

TIPH personnel have admitted that the Palestinians are victims of the occupation and the Israeli politics of ethnic cleansing. They exchanged sympathy and friendly comments with each other. But exchanging emotional words and moral support will not free their governments from their duty to stop the crimes against humanity perpetrated by the Israelis since their troops and illegal colonists arrived Hebron over 30 years ago.

The questions to ask are:

Drug addict among the TIPH:
Why didn’t I publish about the drug Addict?
I published several reports about the TIPH [15] in Palestinian daily newspapers. I remember once that I had violated the moral of my journalistic work when I did not report about a woman from the TIPH who was sent back to her country of origin in critical conditions because of a drugs overdosis. The TIPH spokesperson asked me at that time to not write in the news of this woman. I heard that this TIPH observer actually died after arriving in her country of origin, but the TIPH spokesperson would only say that the woman “did not die but she was in a critical condition and she was sent back to her country with medical staff in an airplane”.

During the Intifada, the desire of the Israeli occupation was to throw the TIPH observers out of Hebron or to force them to leave the city by themselves. In attempting to do this, the occupation used Palestinian infiltrators to shoot at the cars of the TIPH near the Halhoul bridge. Major Cengiz Soytunc of Turkey and Catherine Berruex of Switzerland [16], members of the TIPH observer force in Hebron, were killed on Mar 26, 2002 in an ambush shooting by a Palestinian gunman near Halhoul.

After the scandal around the caricature of the Prophet Muhammad (PBUH) in Denmark, Palestinian demonstrators attacked the TIPH headquarters, and since then PA troops are protecting them.

The Palestinians would like to know when they will have a powerful and armed TIPH in Hebron, which will be able to protect not only themselves from the Israeli military and the settlers, but also protect the Palestinians from the attacks and ethnic cleansing efforts ? And more questions about the TIPH: